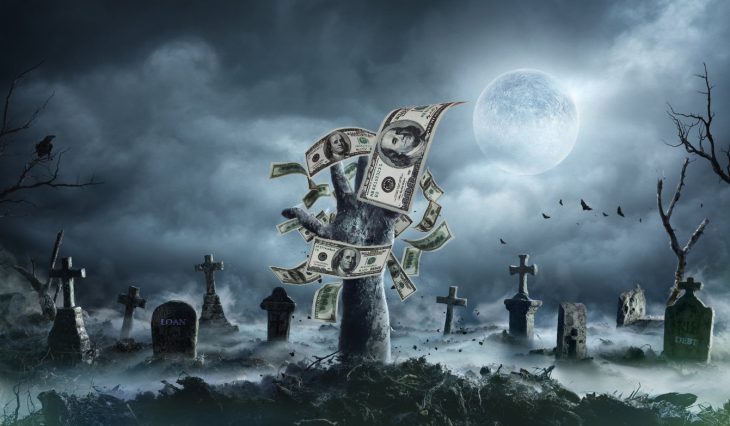 By: jordan_shneir
Read in 8 minutes

Do you know what’s scarier than anything you’ll see on Halloween? Debt. More specifically, zombie debt.

Zombie debt is debt that has long been forgotten and has come back from the grave to haunt you. If you aren’t prepared to deal with zombie debt, it can take a major toll on your finances.

As such, it’s important to understand exactly what zombie debt is, whether or not you have to pay it, and how you can deal with debt collectors asking you to pay this type of debt.

What is Zombie Debt? 🧟‍♀️

Zombie debt typically refers to an old debt that has been forgotten about by both the borrower and creditor.

This can include debt that has fallen off your credit report, has been fully repaid, has expired, or debt that doesn’t even belong to you.

It is debt that has died, been brought back to life (like Frankenstein’s monster) by a debt collector, and charged to you — even if it isn’t your debt.

This typically happens when the original creditor gives up on collecting the debt and sells it to a debt collection agency, which then attributes the debt to you.

If you are being contacted by debt collectors regarding a debt that isn’t yours or you are no longer obligated to pay, it’s important to tread carefully. If you end up paying any money towards the debt, you are essentially claiming responsibility for the debt — making it more difficult to dispute.

What are Debt Scavengers? 🦴

Debt scavengers, also known as debt collectors, are the people who will try to get you to pay back your zombie debt. These debt collectors typically opt to buy very old debts as they are generally cheaper to buy. As a result, they can end up turning a profit by collecting just a small portion of the debt.

This includes debts that are no longer owed due to the statute of limitations, debts that don’t belong to you, and debts that have been discharged due to bankruptcy.

Debt scavengers will often use shady tactics to attempt to get you to pay back the debt that they claim you owe. These tactics include:

Be sure to do your due diligence before making any payments. If you pay even one penny towards the debt, you will reset the statute of limitations, making it possible for collectors to sue you for payment.

What is the Statute of Limitations?

If the debt does belong to you, that doesn’t necessarily mean that you are obligated to pay it.

If the statute of limitations has passed, the debt is still valid, but you are not legally obligated to pay it. While debt scavengers may still try to collect, there is no benefit to paying an expired debt.

Should I Pay a Zombie Debt? 🧟‍♂️

As previously mentioned, debt collectors may contact you about debt that doesn’t belong to you or is past the statute of limitations.

If you make any payments towards these debts, you may assume responsibility for them even if you don’t actually owe any money.

Unless you receive proof that you do owe the debt, there is no reason to pay the debt.

How to Fight Zombie Debts? 💀

What should you do if you are contacted by debt collectors about a zombie debt?

First, be sure not to talk with any debt scavengers on the phone. It’s important to have all communications in writing in case they need to be used as evidence. If they do call you, ask for the agency’s address so you can communicate with them via certified mail.

Send the agency a letter stating that the debt doesn’t belong to you and that they need to stop contacting you.

After sending this letter, cease contact with the agency until they provide written proof that the debt belongs to you and is still within the statute of limitations.

The Fair Debt Collection Practices Act (FDCPA) requires collectors to give this information to debtors.

If the debt isn’t yours and the debt scavengers continue to harass you, you can file an official complaint with your state attorney general’s office or the Federal Trade Commission (FTC).

Furthermore, if you are contacted about a debt that you are sure does not belong to you, you may be the victim of identity theft. In this case, be sure to freeze your credit report, close any accounts that you did not open yourself, report the identity theft to the FTC, and place a fraud alert to watch for fraudulent activity.

Zombie debt can be scary. Most people don’t know what they should do if approached by debt collectors about a debt that they may not owe.

As a small business owner, it’s important to understand what zombie debt is and how to fight it so that debt scavengers aren’t able to send your small business into financial ruin.

By taking the appropriate steps, you can successfully fight zombie debt and avoid paying debts that you don’t owe.

At Camino Financial, our motto is, “No Business Left Behind.” As part of our efforts to live up to this motto, we publish a newsletter full of marketing ideas and ways to grow your business. Subscribe to the Camino Financial Newsletter.

Jordan is a career businessman with over a decade working in corporate environments. He has also worked with several small businesses as a consultant. Recently he’s begun writing articles and analysis on business and finance. He is a graduate of The Ohio State University with a double major in Marketing & Logistics with an MBA from University of Central Florida.