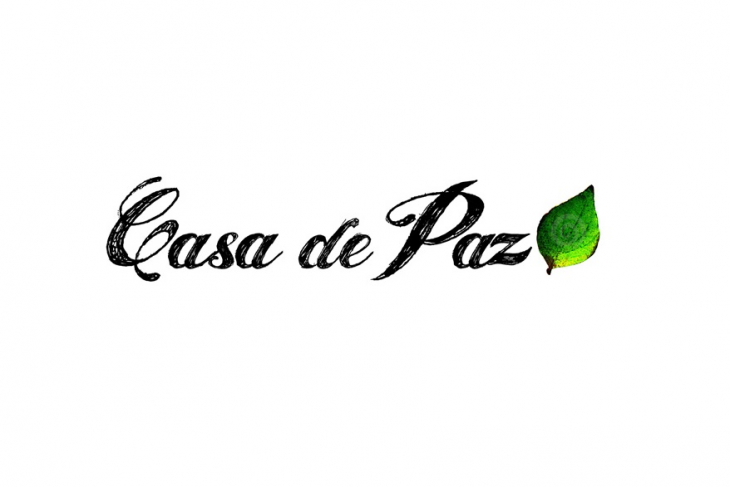 By: gjimenez
Read in 11 minutes

In 2012, a curious invitation came for the pastor: a Catholic charity invited him to visit the Mexico-U.S. border to learn more about immigration issues and how people of faith respond to this problem.

In an unexpected turn of faith, the pastor had other responsibilities and couldn’t go.

Sarah Jackson, who was working as the pastor’s assistant, raised her hand. Not only could she learn more about immigration, but it was an opportunity to get a free trip. And God knows a free trip should never be turned down.

What seemed like an inconsequential decision was about to change Sarah’s life forever.

“The heart of man plans his way, but the Lord establishes his steps” Proverbs 16:9

“I met people who were suffering because of the United States’ immigration policies,” Sarah says about the trip that changed her life.

“I was meeting people who had just been deported and separated from their families. I was meeting asylum seekers who were coming to the US seeking safety, and it was wrong to put them in these immigrant prisons and holding them indefinitely until a judge could make a decision.”

She came back from that trip with a new perspective of life; her eyes had been open to a devastating reality. She knew immigrants needed to be shown compassion and kindness.

And if these detention centers were not going to do so, she was.

She started Casa de Paz as a small personal project in her own apartment. Little did she know that it was going to become a non-profit with a huge reach. Now, they have over 2000 volunteers and have hosted over 3,000 guests.

“I’m just really grateful that God gave me a small vision at first and then has led me along the way to really grow this gift, which I believe was given to me.” 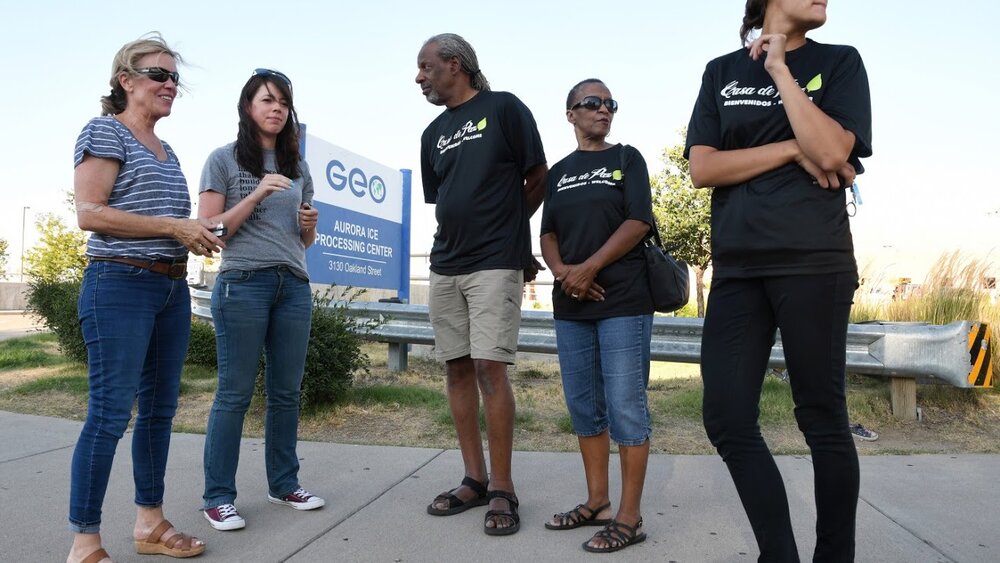 “Do not neglect to do good and to share what you have” Hebrews 13:16

Casa de Paz is a hospitality home open for immigrants and their families in Denver, Colorado. They have four main ways to help immigrants:

When people are released from detention centers, they are welcome at Casa de Paz, where they help them make a plan to get home and provide bus or plane tickets. Volunteers at Casa de Paz also play a pivotal role in reminding them that they’re not alone and deserve to be treated with respect and dignity.

In immigration centers, people can be transferred around states, and their families may not be near them. If the detainee is in Denver, and their family wants to visit them, they can go to Casa de Paz and stay there for free. They offer shelter, food, clothing, toiletries, Wi-Fi, and transportation to the detention center, back and forth.

Before COVID, volunteers would go into the detention center every day to visit those that don’t have anyone to visit them. Now, during the pandemic, they’ve transitioned to a pen pal program. They are writing to over 100 detained immigrants in Denver and 10 other detention centers across the country.

To get the funding they need, they also have a  volleyball league where people can sign up to play. All the proceeds go to allow keep helping people. They have between 70 and 80 teams every season.

In the eight years that they’ve been open, they have hosted 3,133 immigrants from 77 countries (and counting!), and the majority of the folks that stay with them are immigrants from Mexico and Central America.

“I very firmly believe that families belong together. I cannot imagine what I would do if my family were in one of these immigrant detention centers. I would hope that there would be kind strangers along the way who would do everything that they could do to make sure that we were put back together again.” 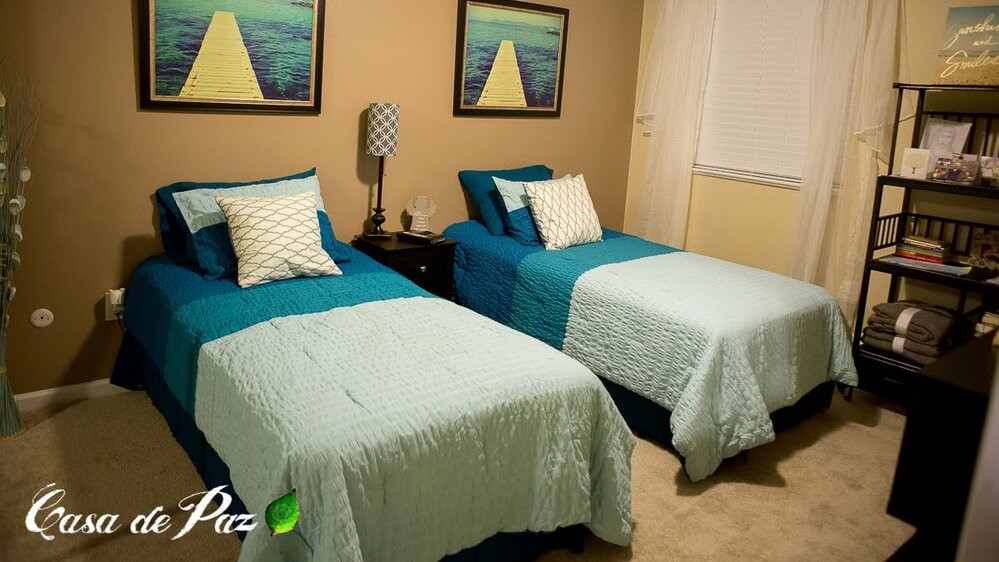 “Do not withhold good from those to whom it is due, when it is in your power to do it” Proverbs 3:27

The pandemic has affected everything and everyone, but Casa de Paz has not allowed it to slow down any of their programs. They have been able to re-rethink how they help immigrants like with their new pen pal project.

But that’s not everything they’ve accomplished during this time.

“It was pretty powerful to know that we were part of making that happen.”

The work that Casa de Paz does is inspiring. Even during the pandemic, they still have time to create new projects to help immigrants. They’ve created Casa on wheels: a van parked outside of the immigrant detention center to help people through the confusing process of being released and not knowing where to go.

So they converted the van into a little living room where a volunteer waits throughout the day if someone gets out. With Casa on wheels, they can start helping immigrants just minutes after they’re released.

One day, Sarah received a curious email from Scott Sawyer, an author. He had read an article about Casa de Paz in a local newspaper and was instantly inspired.

Sarah kept reading the email and was surprised about the words she found: has anyone ever told you that you should write a book?

Many people had asked the same question before, but this time it was different: it was not a suggestion, but an invitation. He was offering to help her write it.

Then came a 4-year long process. They interviewed guests that stayed at Casa de Paz and volunteers. They spoke with politicians who are making policy changes. They spoke with folks who work in detention centers.

All this hard work would serve one purpose: help people understand that immigration is not really a political issue; it’s a moral one. All of us must be empathic and act with kindness and love. 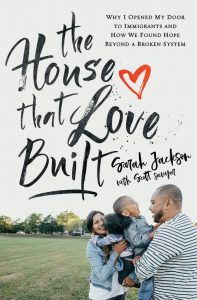 “What I’m most proud about having this book is showing that this community, the Casa de Paz community, is doing simple acts of love. They could be very simple acts, but they matter. They’re important. They show that there’s still goodness in this world.”

“Learn to do right; seek justice. Defend the oppressed” Isaiah 1:17

The future is bright for Casa de Paz. They are developing a new program called Las Casitas.

For the past eight years, they’ve hosted all of the guests under one roof at Casa de Paz. But now, because of COVID, they know it’s not safe to have 10 or 15 people in a small area. So they’re developing a program where community members can open up their homes for one guest for one or two nights as immigrants.

“We’re creating a curriculum where volunteers would go through training to get prepared and open up their home for someone.”

Whatever else the future holds for Sarah Jackson and Casa the Paz, one thing’s for certain: she’s helping make this world a better place in a way that we all should.

“A single person has the opportunity to make their city, their state, their country, their world, a better place for all of us to live in.”

If you are curious about volunteering, receive more information, donate or read the book, and other guests’ stories, go to their website www.casadepazcolorado.org.

Guillermo is the Blog Manager and SEO Editor at Camino Financial. He was worked at publishing houses, marketing agencies and as an editor in several blogs. He is a writer and has published children's picture books.