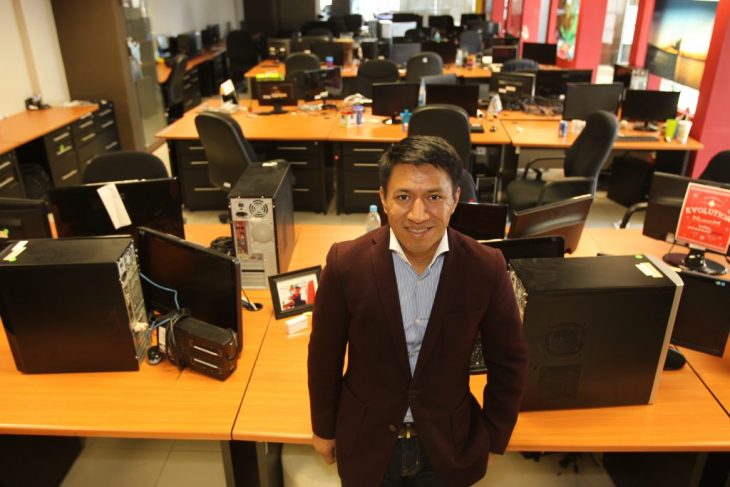 By: marnedo
Read in 5 minutes

The Guatemalan Marcos Andrés Antil opened his own way thanks to his studies in computing informatics and now he leads a company of 116 employees. 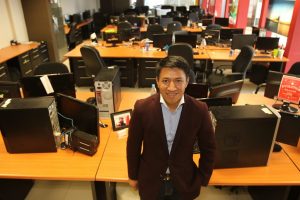 Marcos A. Antil, Qanjobal, founder of Xumak in US, IT Company that has presence in 25 countries./ Esbin Garcia courtesy.

Just as Marcos Andrés Antil says, there were three moments in his life that changed the way of everything that came after. Crossing the borders to get from Guatemala (Huehuetenango) to the south of California, an accident at work when he was 14 and a trip to San Francisco in which he saw a check for $30,000.

If non of this had happened, today – just about turning forty years-, he could have been a tailor in Guatemala, or a worker in Los Angeles or maybe a lawyer with low possibilities.

But no. Thanks to those turns in life, Antil is the founder and president of XumaK, a technology company that today employs 160 people (most of them engineers) in Guatemala, Colombia, Canada and it has his headquarters in Miami. XumaK has earnings and last year it generated six million dollars, this year has forecasted to get up to $12 million and in five years to $50 million.

This company has been ongoing since 2003, centralizing to provide “Services from end to end for content management systems and content-focused applications”. Antil reacts with a smile when this newspaper asks him to explain it in a language for us the non- specialists to understand.

“We work in the technology of the electronic commerce. There are companies and software dedicated to the user experience and there are others dedicated to commerce, the data system that is behind, the shopping carts…. Those are to different fields. We unite both “, The experience of the digital user is referred to all of what surrounds the purchase, meaning, if someone buys a shirt online, that he knows which pants go better with it, how to match with other things.

“ We still don’t dedicate to content, but we provide an easy access for the companies that we work for, to do it”, he explains. Besides the US, his clients are French and Indian companies, he has even worked for the ONU.

It wasn’t what his parents, who where asking for political asylum for over a decade, had in mind for one of their eight children, who where brought gradually to the US crossing the boarder, and paying a high cost for it.

Antil is the youngest of a family of workers who were dedicated to crops of coffee, cardamom and cotton. His family is native of northern Guatemala and their tongue is q’anjobal.

His father came to lead community movements and ended up as a vice mayor of his locality. But those where not good times. The country was in war, and the indigenous, and community leaders assassinations where a daily reality from which they had to run.

They headed up to California, taking their children one by one. “You have to pay a lot to many people to cross the boarder and as we did it with a smuggler, you had to work almost a year to save enough for each trip”, he explains. Marcos Andrés was the last one to arrive in 1990. He had 13. The family was reunited after eight years.

“I’d learned how to sew in Guatemala, where I worked since seven, and my goal was to work in the assembly plans in Los Angeles, but I knew that children were not allowed to work in the US” Antil didn’t wanted to go to school because he didn’t speak Spanish yet and he didn’t speak English, which complicated everything. “I didn’t like it.”

That summer his father took him to a factory and the started to work in the ironing section. One day he had an accident and the machine’s steam burned his hand. “It had bubbles, it was big pain.” He had 14 years and when he arrived to his house he was crying in pain. “I was expecting from my parents to comfort me, but they this the opposite, they told me that as I didn’t’ want to study, that was the job I expected, meaning: deal with it”. That hurt as much as the hand.

“That accident changed everything. I decided to study and changed my path”

So much that he ended with good grades in Belmont high school, in Los Angeles, he participated in student organizations and he could have attended any College but in 1995, the republican governor,, Pete Wilson, forbid that students like him, without the residency could have access to loans or scholarships. He had a work permit for political reasons “But all my College aspirations where thrown out”

“When I got out of high school I joined communitarian organizations and I thought to go to law school or to study Political Sciences”, in case that he went to college. On the weekends he worked as a gardener and one of his clients took him on a trip to San Francisco, where he met a programmer. On his table there was a check for $30,00 “Is that real?”, he asked as he dreamt of how many rents he could pay with that money. The programmer told him that he didn’t has a doctorate or a masters degree but that in this profession, that was what he earned, Antil decided that him, who didn’t know how to write in a keyboard, had to study informatics.

“I went to Bakersfield College, in north LA, a young teacher took me with the others from Central American because the recruiter was Salvadoran. We were good students,” He remembers. College helped them with everything but rent and food. He was 25 years old and he had to work 40 hours a week to live short resources but live. “God has blessed me a lot and has taken good care of me.”

Before graduating he started to work in a Swiss company that took a long shot for new technology: Java, to grow with them. Now he continues working with this language but from his company.

In 2003 he started with the idea of XumaK. “I’m the kind of person that if I don’t do plans in short, medium and long term, I can’t work” explains this man that already has the US citizenship.

He started by his own and he has his first contract several months after. “ From 2004 to 2010 it was very small because I had to let go a lot of people because of the crisis” The clients wanted to keep working with tem but at lower costs and he moved a lot of his operations to Guatemala. “ I gave the engineers an opportunity to work in their own country so they wouldn’t had to migrate like me” he explains.

“In the last years we have flourished more” because it has been a clustering in the market of the technology companies in which they wee few. In fact, he has received purchase offers for his company that he has rejected because what he wants is to buy.

“Now the work force and the operations are growing because we have a good reputation and a good history and we compete with Accenture or Publics and we obtain good clients”, says Antil

Success, but without credit

The company has always reinvested their earnings, and until a few months ago, they haven’t asked for any loans. Now, with the opportunity of growing they needed to ask for one but even with all of what he had achieved he had a bad credit history and nobody would lend him money. “In 2008 I had properties and the company, but with the crisis I had to make a choice between both, I decided to bet on the company and the properties were embargoed.” His credit history was destroyed.

Camino Financial, is a company created by the brothers Ken and Sean Salas, from Mexico, who provided him with a $200,000 small business loan. “The idea is to use the money to invest in research and development, but also to repair the credit history and create good credit that will allow me to keep asking for loans in order to grow.”

In Camino Financial, Antil says that he found assistance and considers their help crucial to his future.
Article translated by Camino Financial. Click here for the original article in Spanish. 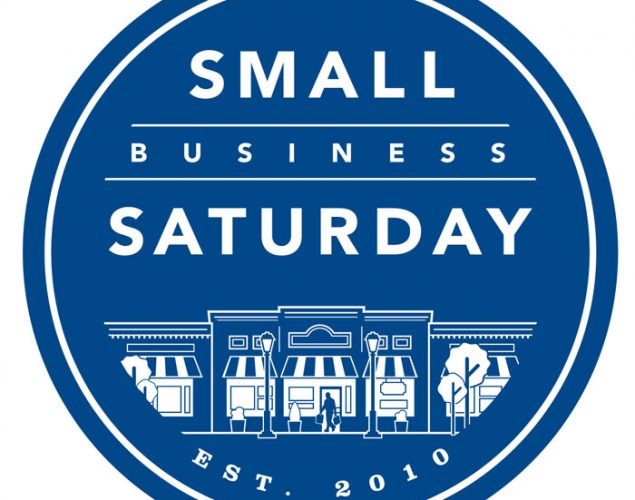 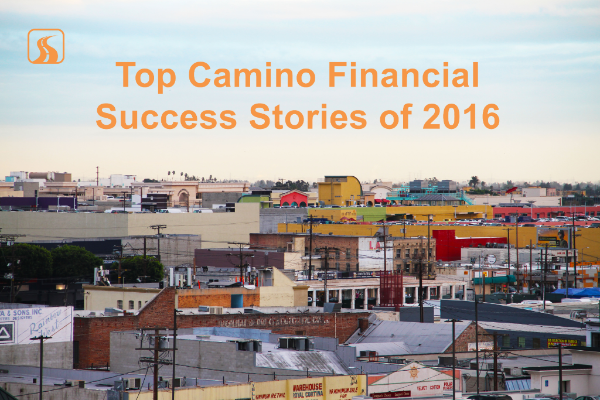 Camino Financial has grown rapidly in 2016 since launching just two years ago in the apartment of our founders Sean and Kenny Salas. From introducing a new Express Loan product to fund businesses that otherwise wouldn’t have access to 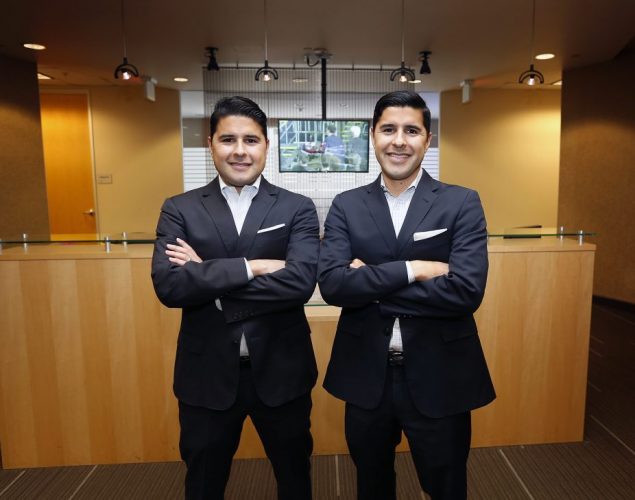 A Startup That Finances Entrepreneurs

Sean and Kenny Salas have started an online financial service with the aim of serving an underbanked market There are those that view difficulties as insurmountable barriers. Others view them as opportunities to reach further or 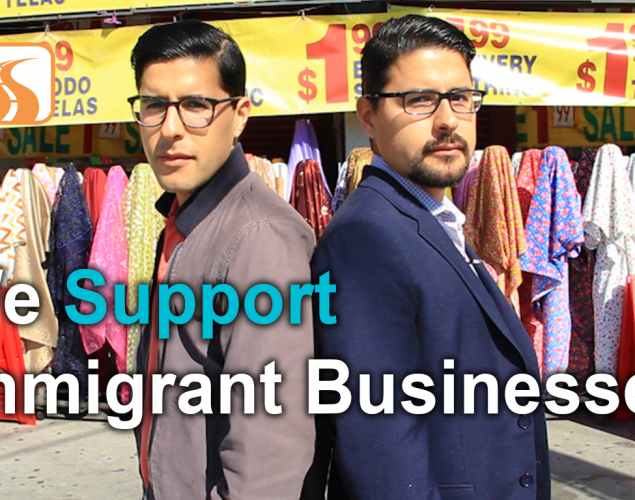 We Will Not Leave Immigrant Businesses Behind!

On January 27th 2017, President Trump took on a divisive strategy in signing an executive order to increase deportations and immigration control. The reaction from our clients and stakeholders was immediately apparent: “Can I still get